SmartLife project is finishing its first year. During 2 017, different activities have been accomplished. Defining the requirements was the first, followed by game functionalities definition, intelligent garment, electronics, graphic environment, among others. The analysis of the data provided by the adolescents was very important for the project and informed the game design. A first version of the electronics and the sensors was developed to start the testing phase and the mock up trials with adolescents in Belgium. The trials gave us some helpful hints about how to conduct our developments. Besides, these sensors have been used during the design of the algorithms for movement detection and Activity Index. The algorithms and the sensors detect MVPA (Moderate to Vigorous Physical Activity) by variations of the Activity Index. These signals will be reported to the game so the game will adapt to the physical condition of the user. 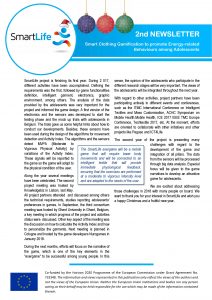 Along the year several meetings have been celebrated. The second project meeting was hosted by Knowledgebiz in Lisbon, last May. All project partners attended  and discussed among others the technical requirements, studies reporting adolescents' preferences in games. In September, the third consortium meeting was hosted by Ghent University in Ghent, Belgium, a key meeting in which progress of the project and activities status were  discussed. Other key aspect of the meeting was the discussion on how to calculate the Activity Index and how to personalize the garments. Next meeting is planned in Cologne and hosted by the game developers Nurogames in January 2018.

During the next months, efforts will focus on the narrative of the game, which is one of the key elements in the "exergame" to be successful among young people. In this sense, the opinion of the adolescents who participate in the different research stages will be very important. The views of  the adolescents will be integrated throughout the next year.

With regard to other activities, project partners have been participating actively in different events and conferences, such as the ITMC International Conference on Intelligent Textiles and Mass Customisation, ACHC Symposium on Mobile Health.Mobile Health, ICE 2017 IEEE TMC Europe Conference, Techtextile 2017, etc. At the moment, efforts are oriented to collaborate with other initiatives and other projects like Pegaso and ICT4Life.

The second year of the project is presenting many challenges with regard to the development of the game and integration of all pillars. The data from the sensors will be processed through big data analysis. Especial focus will be given to the game narratives to develop an attractive game for adolescents.

We are excited about addressing those challenges in 2018 with many people on board. We want to thank you for your interest in SmartLife and wish you a happy Christmas and a fruitful new year.