SmartLife is an European project co-funded by the European Commission through the H2020 program within the ICT-24-2016 topic. The project started last January and has a duration of 24 months. The project involves companies and institutions from different fields, from the gaming sector to the textile sector, passing by the ICT sector and Big Data. The consortium is formed by the ICT sector company and project coordinator KnowledgeBiz Consulting, the Textile Research Centre AITEX, the University of Ghent and the software company Nurogames. 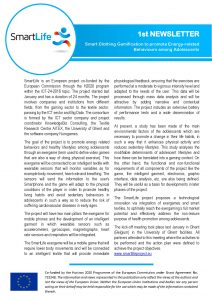 The goal of the project is to promote energy related behaviors and healthy lifestyles among adolescents through an exergame (term used to define video games that are also a way of doing physical exercise). This exergame will be connected to an intelligent textile with wearable sensors that will monitor variables as for example body movement, heart rate and breathing. The sensors will send the information to the user's Smartphone and the game will adapt to the physical conditions of the player in order to promote healthy living habits and avoid sedentary behaviours in adolescents in such a way as to reduce the risk of suffering cardiovascular diseases in early ages.

The project will have two main pillars the exergame for mobile phones and the development of an intelligent garment in which wearable sensors such as accelerometers, gyroscopes, magnetographs, heart rate sensors and respirators will be integrated.

The SmartLife exergame will be a mobile game that will require lower body movements and will be connected to an intelligent textile that will provide immediate physiological feedback, ensuring that the exercises are performed at a moderate to vigorous intensity level and adapted to the needs of the user. This data will be processed through mass data analysis and will be attractive by adding narrative and contextual information. The project includes an extensive battery of performance tests and a wide dissemination of results.

At present, a study has been made of the main environmental factors of the adolescents which are necessary to promote a change in their life habits, in such a way that it enhances physical activity and reduces sedentary lifestyles. This study analyses the modifiable determinants of adolescent lifestyles and how these can be translated into a gaming context. On the other hand, the functional and non-functional requirements of all components of the project like the game, the intelligent garment, electronics, graphic interface, data analysis, etc. are also being defined. They will be useful as a basis for developments in later phases of the project.

The SmartLife project proposes a technological innovation via integration of exergames and smart textiles, to optimally reach the exergaming’s full market potential and effectively address the non-leisure purpose of health promotion among adolescents.

The kick-off meeting took place last January in Ghent (Belgium) in the University of Ghent facilities. All partners attended to this meeting where the activities to be performed and the action plan were defined to achieve the project objectives.